Rokh is a Start-Up company introduced in 2017 that offers
an online service to create a legal contract in an automated way.

Filippo Andreani was collaborating on this project with his friends and he was searching a brilliant idea to promote the initiative. Already he choose the company name referring to a mythical bird: the Roc that is inside in a lot of ancient novels of the middle east.

So he, in an inspired night, wrote a very creative screenplay for a trailer: the concept was simple but with a blizzard of genius.
In an ancient library a monk is searching to write an agreeement but it’s very hard and he is annoying on this task.
So after a lot of troubles he gets out from a pile of old books a modern tablet, goes on the www.rokh.it website, in four steps he creates the agreement ….. and signs it on the tablet surface ….  with an hot sealing wax stamp!

When I read the screenplay, showed to me by a common friend, I was so enthusiastic that i said to him “I MUST do it” so when connected to Filippo we tried to find a way to stay in the budget that was exiguous.

We developed a simple storyboard but with every image needed for the editing.
This gave us the way to plan everything, manage the budget, reduce the shooting time required and define the objects list needed for the video.
So at the end we had a one single session of one day here in the studio, we bought and adapted some clips for the introduction and we focused on the actor performing all the specific actions required.
The technical challenge was something tricky also because it was based on a lighting in low key.
We adopted one of the latest products 4k on the market, a JVC camera, coupled with glorious nikon 24-70 f 2.8 that rendered the scene with softness in the out of focus areas and razor sharp hairs as tradition of best Japanese optics. 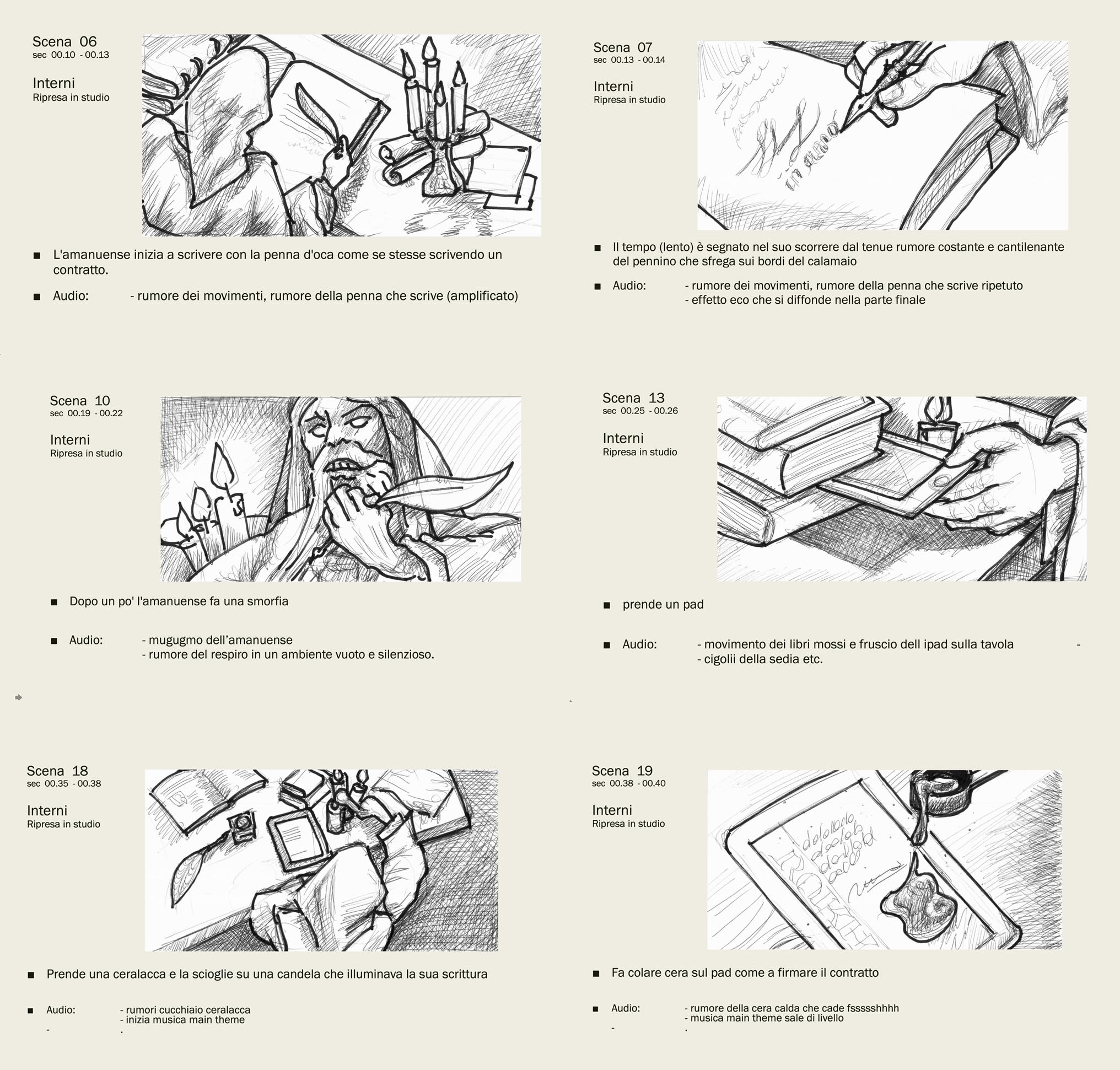 We managed every aspect of the shootings with a set built here inside the studio looking for a lighting that was inspired by Caravaggio artworks.
To go inside the night scenes with candle light we adopted tungsten Arri fresnel lamps.
A lot of elements from old books, maps, inkwell, ribbons, owl feathers & pergamenas, a candle holder from the set of “Game of Thrones” with four dragons, silver ancient pottery were used to take the right sensation into the scene.

In a single day all required videos were produced thanks to the actor experience and his performances.
We had the opportunity to choose between two variant of every scene required, so the final editing was perfect.
We obtained top quality with minimal efforts thanks to our artistic sensitivity and experience in the production field. 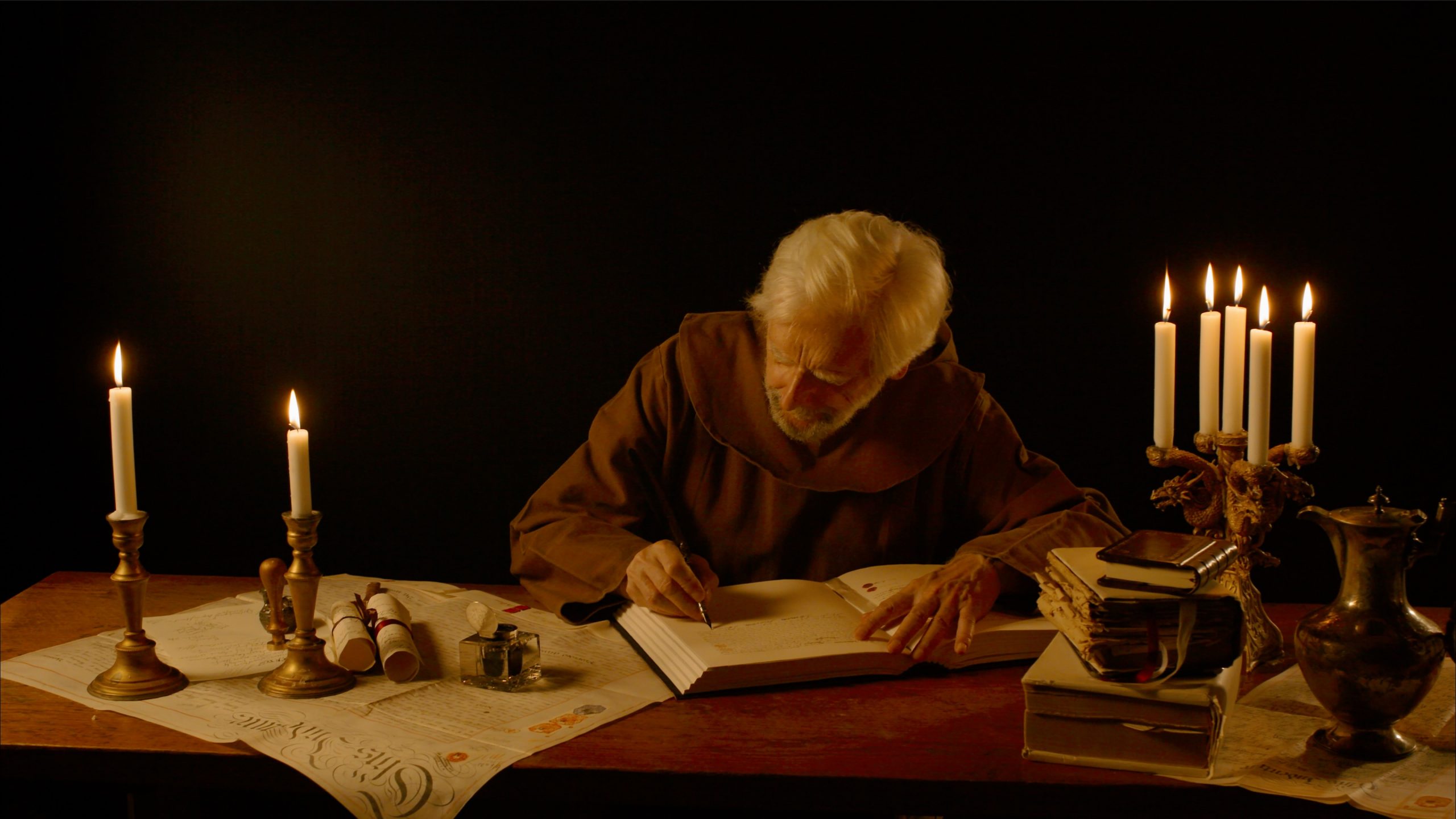 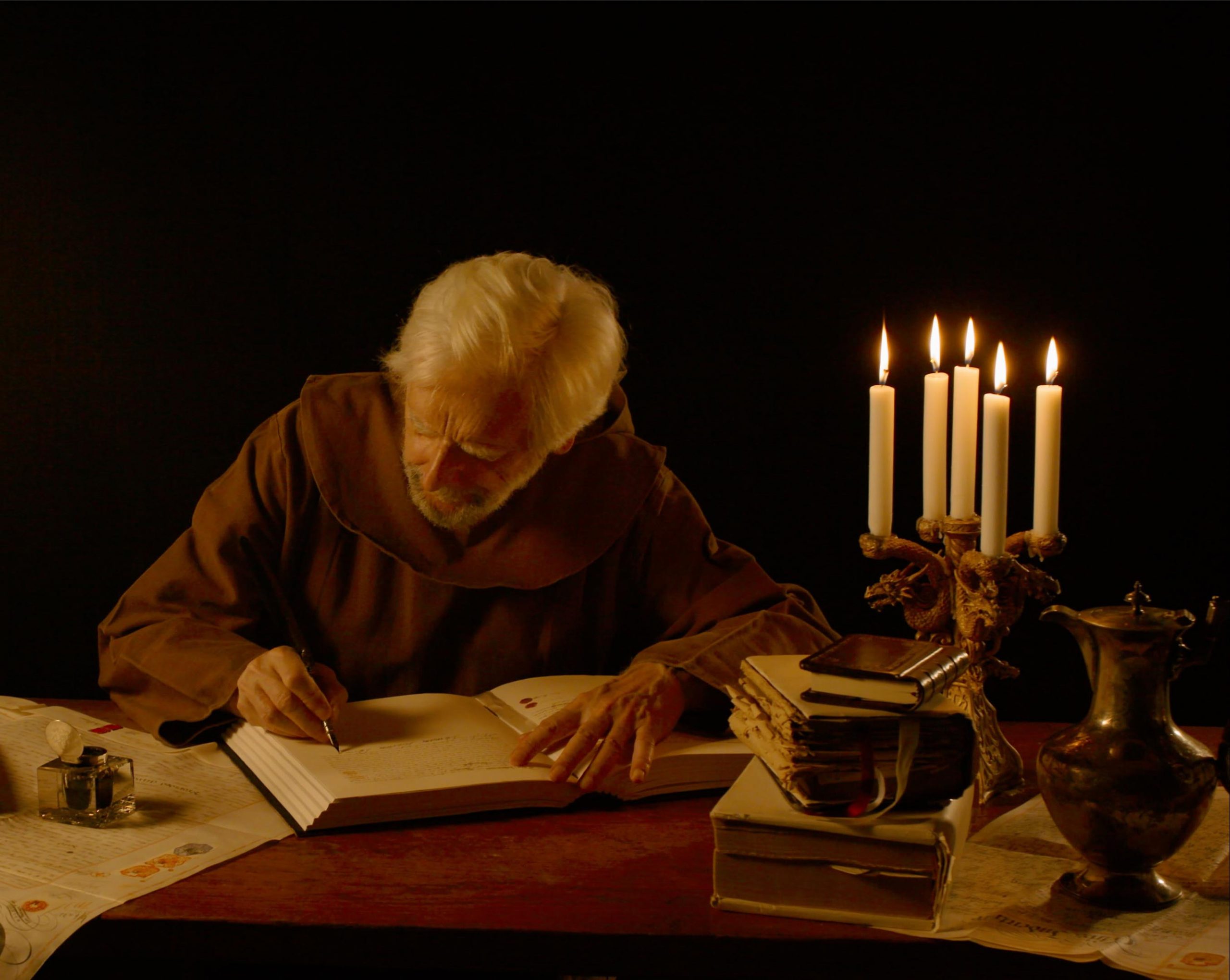 The trailer was successful and appreciated and gave to the company a good image on a serious project, as it really was, managed by the best professional lawyer in the Milan area. 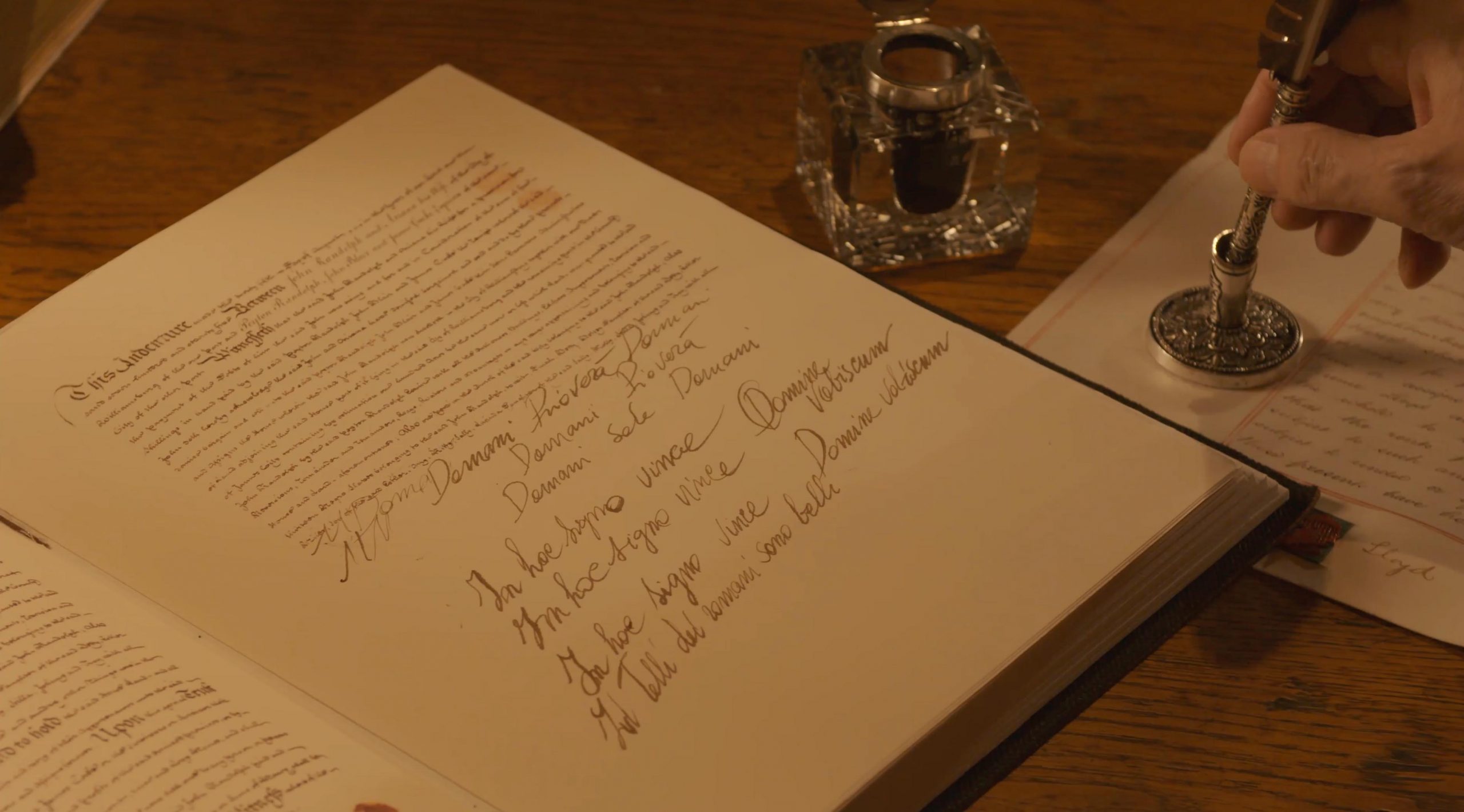 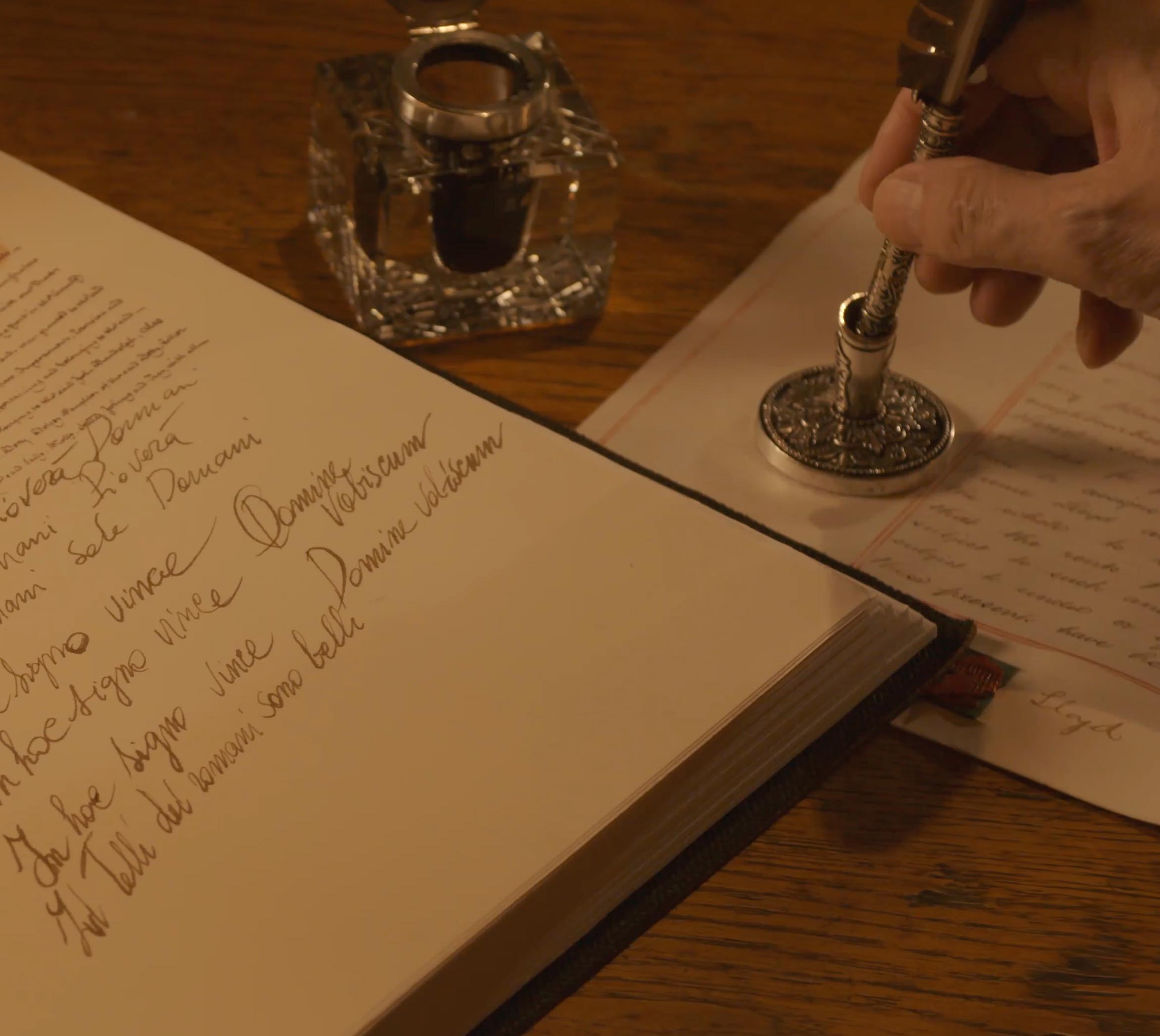 We have been able to perform a quality task in a very short timeline, with client satisfaction, reaching each one of the defined goals.

Sometimes, passion for the Art and competence build a masterpiece.

Get updates about our activities..